I recently got my hands on SF based trio Disastroid newest EP Love Is What You Bring Home. The self released 2 track EP is a unrelenting pummeling. It’s hard to categorize what Disastroid sounds like and that’s a good thing. Sure you can hear the influence of Fatso Jetson and even a hint of old schoolers Fear but Disastroid brings their very own gut punching beat down. I really dig the title track and its galloping rhythm and dirty guitar. Singer and guitar player Enver Koneya unique style is a refreshing crash course in drive. Drummer Braden McGaw is a power house and his the front line of the unforgiving force!

You Know Who out of palm desert are a three piece high energy in your face bad ass band! The band Consists of Greg Seanz on drums, Dylan Brown on bass and front man Mike Pygmie on Guitar and Vocals.  Whats that? You recognize the name Pygmie!  Of course you do, he spends his free time playing in the legendary Mondo Generator fronted by Nick Oliveri (Queens Of The Stone Age) and also bass for John Garcia ( Kyuss). With that being said You Know Who has automatic street cred. But don’t kid yourself, YNW makes a statement with their debut album that puts them  right up there with the likes of Mondo Generator, Kyuss and many other stoner rock legends.  What is really rad about this band is that they are not just another Kyuss rip off. In fact their up tempo riffs and precision is more on the thrash side. On  October 16th through Self Destructo Records YNW will drop its debut full length to world of Rock N Roll that desperately needs a band like them. The 11 song bone crushing LP is a must buy and may be my early pick for rock album of 2015.

2. If you survived the first three tracks then track four titled “Wastoid” featuring Nick Oliveri will finish you off. Highlighted by a sing along chorus this track is the perfect soundtrack for all you folks needing a wake up song or to realize you still have a pulse.

3. Track 11 titled “Recycler” is probably my favorite track on the record. The intro brings back the oldschool thrash sound in the vein of Megadeth.  The musicianship is nothing but top notch. Greg, Dylan and Pygmie absolutely crush it. For all you music jocks who can only listen to complicated and shit that takes talent you will be stocked. Yeah, I’m talking to you guy who loves Rush and can’t be bothered with simplicity like The Ramones. The breakdown is a soulful twist that sinks right into your got reminding that you should probably have a beer and enjoy the masterpiece this band just gave you.  This song is also accompanied by yet another stellar vocal guest. Sean Wheeler (Throw Rag) lends his raspy whiskey town voice to the track.

Great news! You can pre-order this bad ass album using the link above!

YOU KNOW WHO UPCOMING SHOWS

with Disastroid, The Sorority & Between Your Teeth 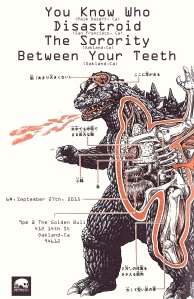