Year Of The Cobra is 2 piece band out of Seattle that has been making waves on the doom scene for quite awhile now. Their third and latest release “Burn Your Dead” is spectacular! Being only a duo means that the members need to work even harder to sound big. Well, Year Of The Cobra are doing it the right way, because they sound enormous. Jon’s heavy handed drumming plays a large part into that. Jon was kind enough to take part in our RANDOM questions segment! Thanks Jon!!

WH: What is your go to guilty pleasure band/artist?

Jon: Permission to Land by The Darkness is a gem from start to finish.WH: If you could make an album with one band/artist dead or alive who is it and why?

Jon:  Hank Williams. I spent a LOT of time traveling the country with my Grandfather when I was younger and we listened to Hank on 8-tracks in his RV… it really struck a chord at an early age and still does to this day…. Hank was the original badass.WH: Favorite genre of music besides your own?

Jon: Punk rock and hardcore still gets me stoked

Jon: Sunflower seeds!WH: Besides music name one hobby you enjoy?

WH: What was the last gift you gave someone?

Jon: I gave my nephew a slingshot for Christmas

WH: If you could sing one song on American Idol, what would it be?

Jon: FEAR – I Don’t Care About YouWH: What song best describes you?

WH: What nickname would you give yourself?

Jon: Jon “sleeves are lame” BarrysmithWH: If you could steal one song from anyone which one would it be and why?

Jon: Melvins – Queen. WH: Describe yourself as a slogan? 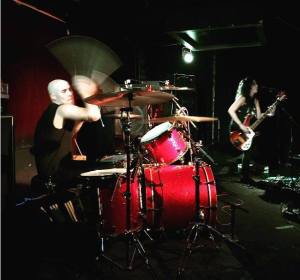 WH: Give your bandmates nicknames?

WH: What is a band we should be checking out?

Jon: Check out Toke – they shred. We’ll be touring Europe with them in May and June

THANKS AGAIN JON!! You all should make sure and check out Year Of The Cobra!!